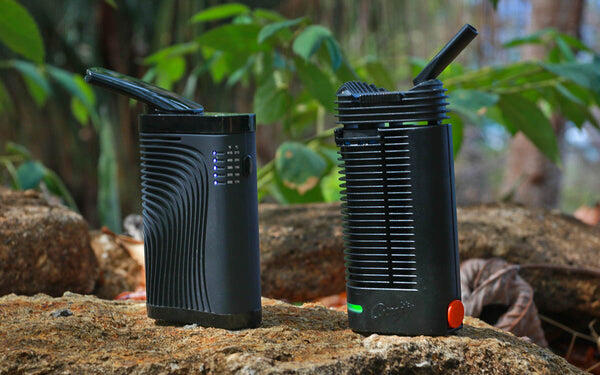 There is a large variety of small, portable, hybrid (they use both convection and conduction heating) vaporizers on the current market in Canada at a range of price points.

Consumers want to know what the best vaporizers are, what they are getting for their money, and they want value, reliability and quality for the money they spend.

Today we are going to review and compare the Boundless CF and the Crafty, both hybrid vaporizers that have been on the market for some time. They are popular for their own reasons and come at remarkably different price points, with the CF costing half the price of its competitor.

We will review their vapor quality, material quality, ease of use and other factors that consumers want to know about before investing in a vaporizer.

Hybrid vaporizers use a mix of conduction (the walls of the oven chamber) and convection (moving hot air) to heat the material in them. Each vaporizer will use a different combination of these technologies.

The combination helps to achieve more heating efficiency that convection alone.  Neither of these vaporizers is particularly portable (due to battery life and not size) or discreet (which is average for units on the market).

Both of these vaporizers will produce thick, rich, flavorful clouds of vapor. The Crafty has a slightly better-quality vapor than the CF, so it is smoother, a little stronger and more flavorful.

The CF though does a much better job than some other more expensive models of the vaporizer.  You do need, for both products, to use all of the contents from the chamber in a session to maintain efficiency.

The CF has a much larger chamber than its competitor, at 0.5 grams and 0.25 grams respectively but you do not need to fill it to capacity. It will work well with smaller amounts.

The vapor quality in this unit does appear to degrade at the higher temperatures, unlike its competitor which maintains flavor significantly better at high temp.

The batteries in both of these units cannot be replaced. The CF outperforms its competitor in terms of battery life, with 60 minutes of use compared to 40 minutes.

It needs about three hours to charge fully though and you have no pass-through charging with the CF like you do with its competitor (you can use it while charging above 20% battery level), which takes about two hours to charge.

Both vaporizers are similar in appearance, which can best be described as functional. The Boundless CF however is built with slightly lower quality materials but that shows mainly only on close inspection. For the price, you are still getting a product that won’t break or crack when you are taking it on the go with you.

Both of these vaporizers are easy to use with single button control. The Boundless CF has 5 pre-set temperature settings to choose from while the Crafty has only 2.

The CF swivels out to reveal the chamber, making loading very simple but its competitor has a sturdier, higher-quality construction.

Other Things to Know

Though they may appear alike and even have a number of similarities, these two vaporizers are quite different. The choice between them will come down to cost, vapor quality and flavor, battery life and user preference when it comes to temperature control.

Both products have single button controls and a range of temperatures that will get the job done. Both have non-replaceable batteries and though the CF will charge faster, its batter will not last as long and does not allow for pass-through charging.

The CF is an excellent vaporizer for its price. It produces a flavorful, thick, high-quality vapor especially at the lower temperatures but the flavor does degrade noticeably at the higher temperatures. It has a larger chamber, which does well with smaller fills.

You have five temperature pre-sets with this model where you require an app to get more than the two pre-sets with its competitor. With the smartphone app. However, you can choose from any two temperatures that are within range. Finally, CF definitely has a price advantage.